King Tides in the Baylands 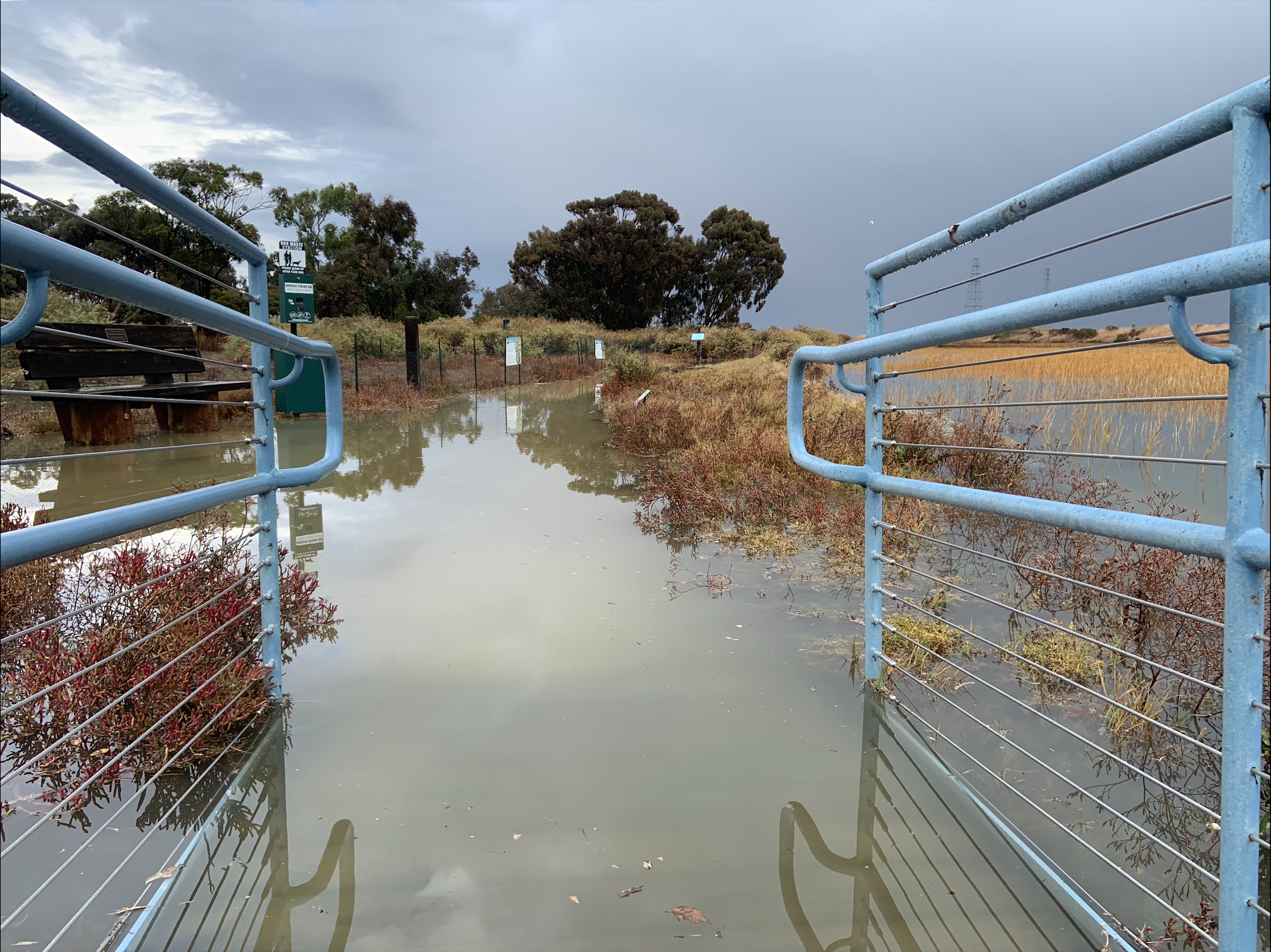 Can you imagine being warned that if you need to get out of the building, you need to go soon, or else you might be stuck for a couple of hours?

This happens several times a year at the EcoCenter because the tide will be so high that it floods the ramps. We could, of course, get out in an emergency. Our feet would just get wet.

The EcoCenter, formerly the Seascout building, is elevated so that tidal waters can come under the building. We even have a small window in the floor that allows us to see the water or mud, depending on if the tide is in or out! These tidal waters are very important to the health of Baylands. They bring in oxygen and nutrients from the ocean, which come to feed the plants and animals which rely on them.

But what are the tides?

Tides are the gradual rise and fall of sea levels caused by the combined effects of the gravitational forces exerted by the Moon and the Sun and the rotation of the Earth. Tides are entirely separate phenomena than waves (caused by wind) or tsunamis (caused by under-sea earthquakes, volcanic eruptions or landslides).

In 1687, Sir Isaac Newton explained that ocean tides result from the gravitational attraction of the sun and moon on the oceans of the earth. Although the sun is much larger than the moon, because of the much greater distance from the earth to the sun, the sun’s tide-generating force is about half that of the moon.

Because the Earth rotates through two tidal “bulges” every lunar day, coastal areas experience two high and two low tides every 24 hours and 50 minutes. High tides occur 12 hours and 25 minutes apart. It takes six hours and 12.5 minutes for the water at the shore to go from high to low, or from low to high.

Although the moon is a major influence on the Earth’s tides, the sun also generates considerable tidal forces. Solar tides are about half as large as lunar tides and are expressed as a variation of lunar tidal patterns, not as a separate set of tides. When the sun, moon, and Earth are in alignment (at the time of the new or full moon), the solar tide has an additive effect on the lunar tide, creating extra-high high tides, and very low, low tides—both commonly called spring tides. One week later, when the sun and moon are at right angles to each other, the solar tide partially cancels out the lunar tide and produces moderate tides known as neap tides. During each lunar month, two sets of spring tides and two sets of neap tides occur.

While the term “king tide” isn’t a scientific term, it is used to describe an especially high tide event.

The greatest difference between high and low tide is around Full Moon and New Moon.

These are known as spring tides. During these Moon phases, the gravitational forces of the Moon and the Sun combine to pull the ocean’s water in the same direction.

The king tides occur when the earth, moon, and sun are aligned at perigee and perihelion, resulting in the largest tidal range seen over the course of a year.

Alignments that are ‘near enough’ occur during approximately three months each winter and again for three months in the summer. During these months, the high tides are higher than the average highest tides for three or four days.

While king tides are an unusual occurrence now, the tide will get higher with rising sea levels. Seeing a king tide now can be a scary look into the future! Why is it concerning? Let’s consider, for a moment, the plant life of the Baylands, and how it would be affected by the rising tides.

Marshlands are usually divided into two zones – low marsh and high marsh. As their name would suggest, these zones are defined by elevation – and there is a visible difference between the plant life that grows on each. All marsh plants must be salt-tolerant to some degree, due to their regular exposure to ocean water. But those that are more salt-tolerant are found on the low marsh, and those that are less salt-tolerant are found on the high marsh. See if you can spot this difference next time you are out in the Baylands!

Low marsh species like pickleweed and cordgrass can survive being covered in salty water for longer periods of time, thanks to special adaptations. Cordgrass has a hollow stem, which allows oxygen gathered by the tallest leaves poking out of the water to cycle through the entire plant (like breathing through a snorkel). Pickleweed can transport and isolate excess salt within itself, storing it in leaf tips which fall off after becoming too salt-saturated – freeing the plant from any salt it does not want. High marsh species don’t have adaptations as advanced as these; plants like gumplant are salt-tolerant to an extent, but are much more comfortable living a bit farther away from anywhere they’d get their feet too wet.

Back to rising sea levels. As the average height of the tides rise higher and higher, these high marsh plants will begin to lose their habitat. They will need to grow in a spot that isn’t constantly covered in ocean water, and this will become harder to find. The USGS estimates that 95% of historical wetland habitat in the San Francisco Bay area has been lost to development, and rising tides will continue to push this critical high marsh habitat back. We will begin to see some changes in how the Baylands look.

Today, these king tides only happen a few times a year. It can be a pretty special sight to see! If you get a chance,  join the EV on January 11th for our interpretive king tide walk through the Baylands, or come on your own. Just remember to wear waterproof shoes!