Being in the Woods: A Huddart Park Story

On a bright spring morning, 2nd graders from Addison School in Palo Alto traveled to Huddart Park for a field trip with Environmental Volunteers. They were bursting with excitement for their 2-hour nature hike, where they would discover the plants, animals, and bugs of the forest. Huddart Park is a perfect field trip for local classes that participate in EV’s Forest and Foothill Ecology program. The park is a living outdoor classroom full of the sights, sounds, and smells of forest life.

The twisting journey up Kings Mountain Road to Huddart Park is a world away from the hustle and bustle of Silicon Valley. The squawks of Acorn Woodpeckers fill the air. The sun filters down through the mixed canopy of redwoods, Douglas firs, and oaks. 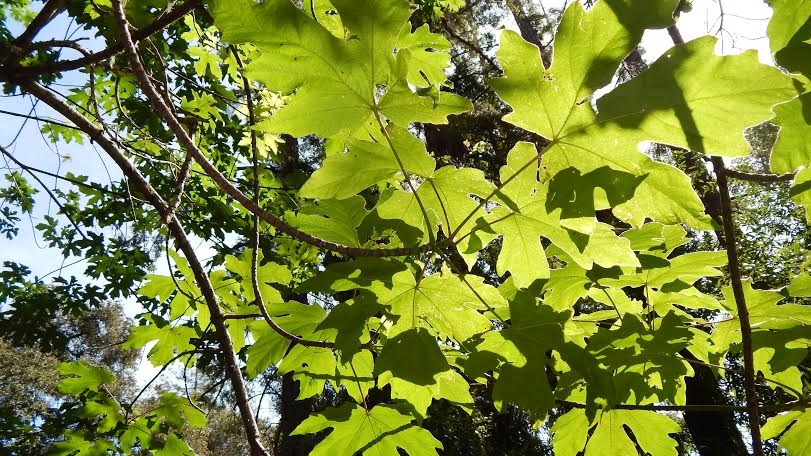 John Seyfarth was one of the Environmental Volunteers leading the day’s trip. “Huddart Park has great redwood habitats. It’s a good opportunity to go out and scramble around in some of the big redwood trees and see what a fairy ring looks like up close and personal.”

Volunteer Marianna Raymond added, “There are lots of wonderful native trees to compare and contrast – there are Douglas-firs, there are several kinds of oak to compare, and ferns that live in moist environments. You can observe decomposition with the shelf fungus. There is also the lichen and hopefully banana slugs, and we’ll look for turret spider burrows, and more. It’s a great place.”

For the students, one of the highlights of Huddart Park is the infamous “Lizard Log” at the end of the trail. Students swarm around the end of a fallen log, watching western fence lizards dart around inside the protected interior. The students learn why the “Lizard Log” is a perfect habitat for lizards: it sits in the warm sun (which lizards like), it has a hollow center (great for hiding from big prey), and is located in a big grassy field (full of spiders, beetles, and grasshoppers—their favorite food!). 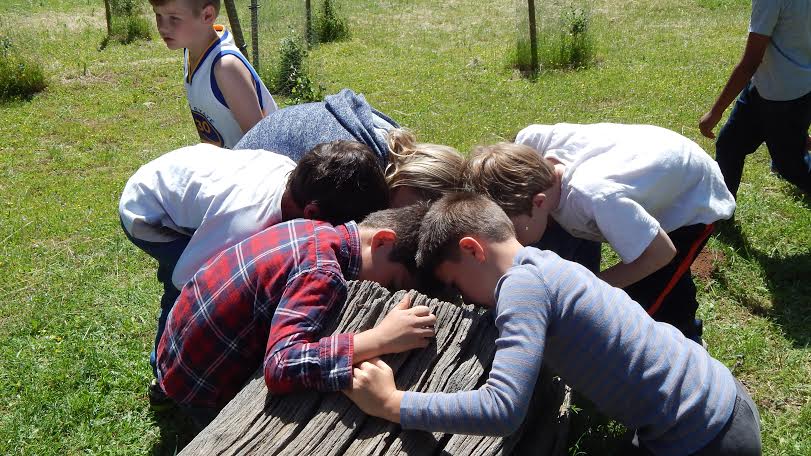 Former EV Staff member Jesse Hall noticed a difference in the students’ attention span. Outside of the classroom environment, the students were fully absorbed in observing the natural world. “The boys on my trip loved the Lizard Log. They could spend hours right here and be perfectly content.”

Parent chaperone, Komey Vishakan was also delighted to get her son Yuvan, 8, outdoors for the day. As former Co-President of Addison Elementary School’s PTA, she values any experience that gets kids into nature.

“The whole field trip was really nice,” Komey said. “Just being in the woods, especially when our volunteer said, ‘stop and listen.’ Because until then, nobody was stopping and listening. At that moment, I could hear so many different birds. So I thought the experience was about taking the time to just forget about everything and listen – I think we learned a lot. That was really great. It’s educational as well because it shows how much we take for granted in nature. I thought it was important for the kids to experience that.” 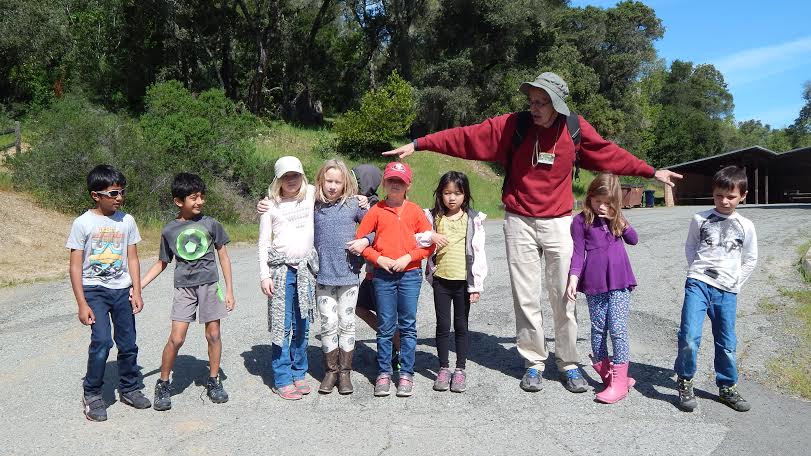 Volunteer Alan Ray lines up students and prepares them for a race to the Lizard Log.

Yuvan and his friends sang songs while tromping through the woods on their way back to the school bus. “Ya, ya, ya!” They chanted in unison as they linked arms and marched together down the narrow path. It’s a picture of childhood that is becoming less common, Komey says.

“When I was a kid, I spent a lot of time outdoors. I could tell you every little tree and plant in the yard, including fruit tree and flowers,” Komey said. “Kids these days don’t do that. When I take my kids out and say let’s play outdoors for half an hour – when I turn my head, they’re back in doors wanting to watch TV. They don’t have that interest – perhaps because they didn’t develop it early enough. It’s like they need to get back inside. It used to be the other way around. When I was a kid, you came back indoors just to eat or grab a drink of water. I don’t know how we can flip that. They have so many other things available to them – video games and TV – its hard to compete with those.” 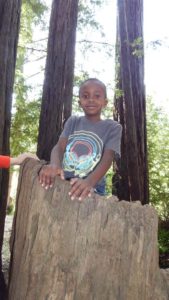 During their morning trip to Huddart Park, the script was flipped. For two hours, Addison students weren’t peering at their screens. Instead, they were peering into fallen logs, hiking through redwoods, exploring the creek, and smelling bay laurel leaves (“It smells like bubblegum!”). Best of all, the students ask questions about the natural world around them, learning about everything from scat to spider webs.

And they began to see connections between everything in the natural world – including themselves.

“I asked my students to see if they could find a redwood cone,” Jesse Hall said. “They picked up everything they could find—except a redwood cone. And when they finally found one, it took them a couple of minutes to realize how small the cones are compared to how big the tree is. That was a good crystallizing moment.”

Photos and story by Kristi Wilson, edited by Elliott Wright

Nature Notes Homepage
Our Story
Read more about our story and who we are.